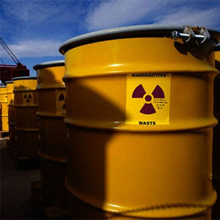 Natural zeolites have superior selectivity for certain radionuclides (e.g., 90Sr, 137Cs 60Co, 45Ca, and 51Cr) compared with organoresins and are cheaper and much more resistant to nuclear degradation. Dozens of papers have demonstrated the ability of several natural zeolites to take up these and other radionuclides. A mixture of synthetic zeolite A and natural chabazite from Bowie, AZ, was used to take up Sr and Cs, respectively, from contaminated waters at Three Mile Island, PA.

The same selectivities for Cs and Sr by zeolites permit treatment of radioactive fallout from nuclear tests and accidents. The addition of clinoptilolite to soils contaminated with 90Sr markedly reduced the strontium uptake by plants, and the presence of clinoptilolite inhibited the uptake of Cs in contaminated Bikini Atoll soils. Several zeolite processes have been developed to counteract the fallout from the 1986 Chernobyl disaster. Zeolites added to soils reduced the uptake of 137Cs by pasture plants in the vicinity of Chernobyl, and dietary zeolite reduced sorption of radiocesium by sheep fed falloutcontaminated rations in Scotland.